The Holmes Student Center at Northern Illinois University had remained unchanged for nearly six decades, until last fall. In October, the DeKalb-based college opened a completely renovated ground floor with new dining options, as well as a modern lounge area designed for both studying and socializing.

Prior to the $20.9 million renovation, the only non-residential dining option on campus was a local Subway franchise. “We lacked a good presence in retail restaurants. For a campus of our size, from a business perspective, we should have done more retail,” says Daniel Koenen, Executive Director of Campus Dining. Introducing new brands was an easy way to increase revenue. And placing the restaurants in the student center would help attract more people.

Large groups can meet for burgers at Huskie Den.

Koenen knew he wanted to offer a mix of national and house brands. To figure out what that would be like, NIU hired a consulting firm to understand what students and stakeholders wanted. “Seating and space were important, but coffee and Tex-Mex were popular items in these surveys,” Koenen said.

The demand for coffee led Koenen to settle on Starbucks. “It was pretty easy, everyone loves it,” he says. The students had also requested a location for a bar and grill. This led to The Huskie Den, a pub-style restaurant, for the house brand. Customers can find typical pub offerings like hot wings, waffle fries and wraps, as well as gourmet half-pound burgers and even fried cheesecake. A lounge area for up to 200 people, 12 pool tables, eight TVs, and a bar featuring local craft beer and wine make it the perfect space for gatherings. The renovation also made it easier for guests to access the ground floor of the student center, which includes a bowling alley and a new stage for bands or other programs. “The bowling alley existed, but there will definitely be more traffic,” predicts Koenen. 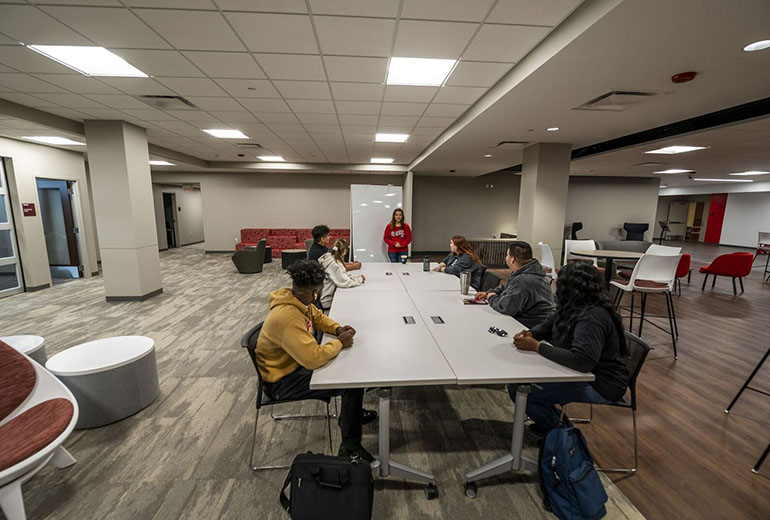 With these two locations in place, Koenen sought to complete the food offering by adding a Qdoba as well as an in-house convenience store. Adding a deli counter with made-to-order submarine sandwiches would make the convenience store stand out. “We debated between doing a sushi bar or sandwiches, and sandwiches won again. The students wanted the sandwiches to be made in front of them and customizable. That was the main thing,” he says.

The fact that more students are coming to Holmes to eat also meant a need for more seating options in a more inviting atmosphere. The dark, cramped, maze-like space has been transformed into a spacious open floor plan with double the square footage. “The architects focused on wide passageways and spaces for students to congregate and eat. They really opened up the space and brought in a lot of light,” says Koenen.

Students can stay alone in the reading lounge or gather in group spaces to study or meet. Mobile furniture allows customers to easily rearrange the space according to their needs. An outdoor patio also adds more space to gather when the weather is hot. “Our goal from the start was to give students somewhere they’ll want to come, somewhere they’ll feel comfortable hanging out, whether it’s just to take a break from class, attend a club meeting, or enjoying the wings while watching a ball game with friends,” Associate Vice President of Student Affairs and Dean of Students Kelly Wesener-Michael said in a press release.

The renovated student center held a soft opening at the end of October during the reunion weekend. “We’re still kind of in that phase,” Koenen says. The Huskie Den was initially only open for lunch, but will expand its hours from 10:30 a.m. to 9 p.m. during the spring semester. The convenience store will also start offering sandwiches soon, and the Qdoba is expected to open in March.

But even with the limited offers, the renovation was already worth it. “Everyone is really positive, they’re thrilled,” says Koenen, who notes that traffic counts haven’t been made available yet. “Just based on before what it was like before the renovation, it’s so much busier. You didn’t see students there studying before, but now they are.

The College of St. Scholastica in Duluth aims to break new ground in a decades-old goal to build a student center in the spring of 2023. To do so, the college must meet its goal of raising an additional $7 million, or close to it, in time to pay for a building that would center […]

By Shena CrittendonStrategic enrollment management and student success Virginia Commonwealth University has received a nearly $2 million grant from the U.S. Department of Education to expand its You First First Generation Student Success and Research Center at VCU. The five-year grant will increase the university’s ability to support Asian and Pacific Islander American students through […]

Opinion: A college student learns the value — and joy — of fostering an orphaned pet