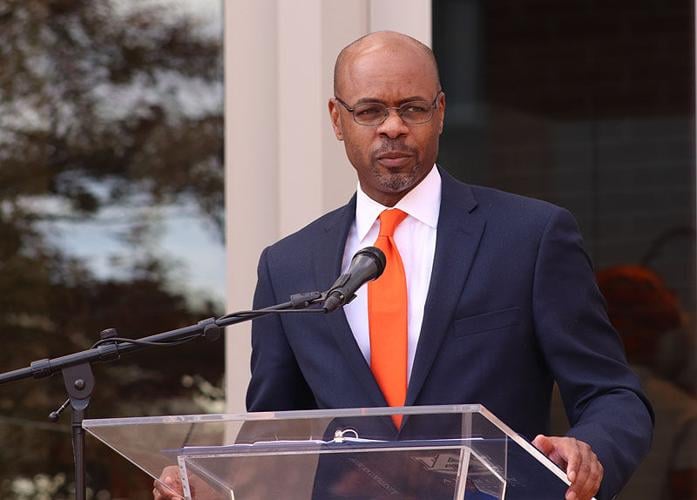 Harold Melton was honored Friday by Auburn University officials, who named the campus student center after him. Melton, while a student in the 1980s, became the first African American to be elected president of the school’s Student Government Association.

Harold Melton was celebrated by his alma mater on Friday afternoon for being a trailblazer, but it was his humility that was on display.

Auburn University officially opened the Harold D. Melton Student Center in the center of campus, honoring the first black student elected president of the Student Government Association, as well as the first African American named Chief Justice of the Court Supreme of the State of Georgia.

Melton was quick to thank his friends, family and others who helped him along the way – from being a Georgia teenager who chose to attend Auburn in 1984, managed to make elected to the SGA’s top office in 1987, then returned home to attend law school at the University of Georgia.

After that, he held a succession of government posts before his appointment to the Supreme Court in 2005 and ultimately as Chief Justice in 2018.

Melton spoke of his deep respect for Harold A. Franklin, who in 1964 became the first black student to enroll at Auburn.

“I can’t compare my experience here at Auburn to that of Harold Franklin. What he had to do here was basically endure. He had to endure, he had to suffer, and ultimately this university [did] whatever it takes to make sure he got what he earned.

Larisa Elizondo graduated from the University of Michigan debt-free, but to get a law degree she had to take out about $160,000 in student loans. “There was a time when I had to get a second job as a waiter at a bar so I could do it all, because, you know, my student loan […]

Work is ongoing and completion in spring 2022 is scheduled for the expansion and renovation of the Trevecca Nazarene University Jernigan Student Center. When completed, the building will contain a bookstore; an improved commercial kitchen; a renovated dining room that can accommodate more than 450 students; a café and market adjacent to an outdoor plaza; […]

For decades, community leaders across the valley have lobbied for our own four-year college. We don’t have one yet, but a deal just reached by state lawmakers is a big step toward that dream, and we’re glad to see it. Members of the Senate and Assembly said last week they had agreed to a $59 […]